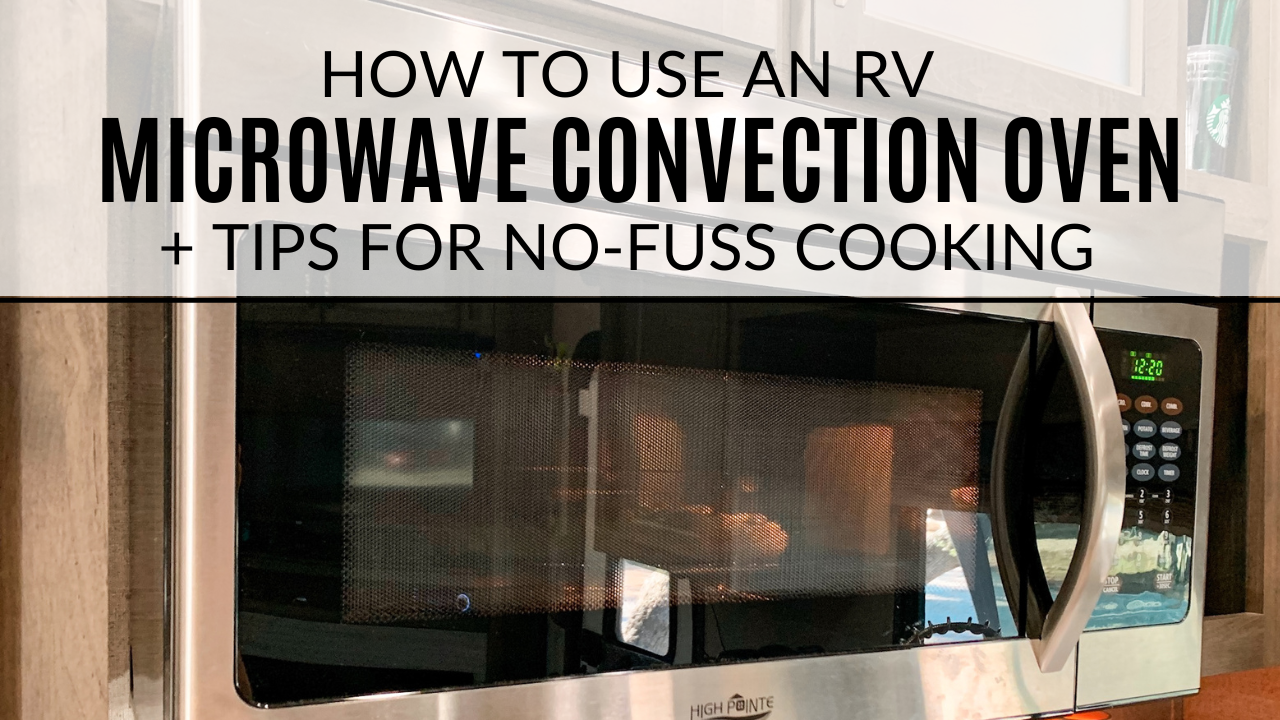 You may have noticed many new RVs are coming equipped with microwave convection ovens. In fact, many RV manufacturers are ditching the standard propane-powered ovens altogether!

An RV microwave convection oven is a great tool that allows RVers to create delicious meals right from their camper, however, many people are still hesitant to give this appliance a try. I know we were!

Like any new appliance you might try, there’s a bit of a learning curve, but with these tips, you’ll be able to make the most of your RV microwave convection oven.

*This post may contain affiliate links. As an Amazon Associate, I earn from qualifying purchases. I may receive a small commission when you make a purchase using my links at no extra cost to you. Thanks for your support!

What is a microwave convection oven?

Just like a regular microwave, microwave convection ovens will come with a turntable and mirrored sides. The difference is all about how the food gets heated and the end results.

RV microwave convection ovens are two-in-one appliances. You can use either the microwave setting to reheat food or select the convection setting and the appliance works just like a regular kitchen oven. 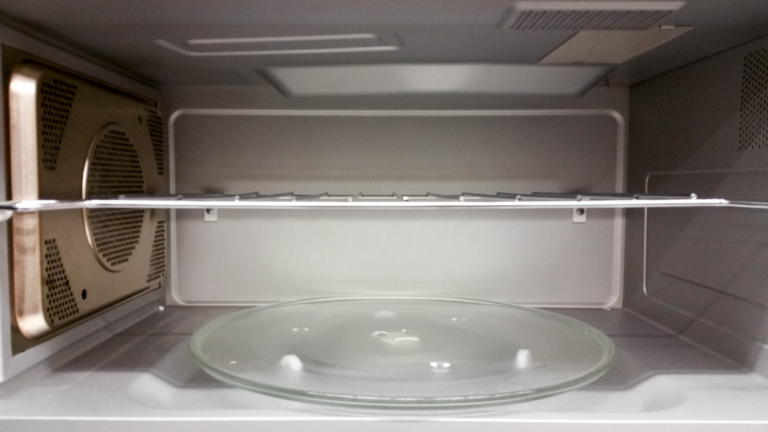 How do RV convection ovens work?

The difference between a convection oven and a standard oven is how the heat gets distributed. Instead of blasting heat straight into the oven, a convection oven has fans that take that heat and circulate it resulting in a quicker cook time and more evenly cooked food.

Convection cooking is great for roasting and even baking your favorite treats in your RV. We use ours to roast veggies, bake potatoes, cook sheet pan dinners, and bake cookies and bread! We’re even able to fit a full-size pizza in our convection oven! Once you start using your RV convection oven, you might be surprised at how versatile and efficient this appliance truly is. 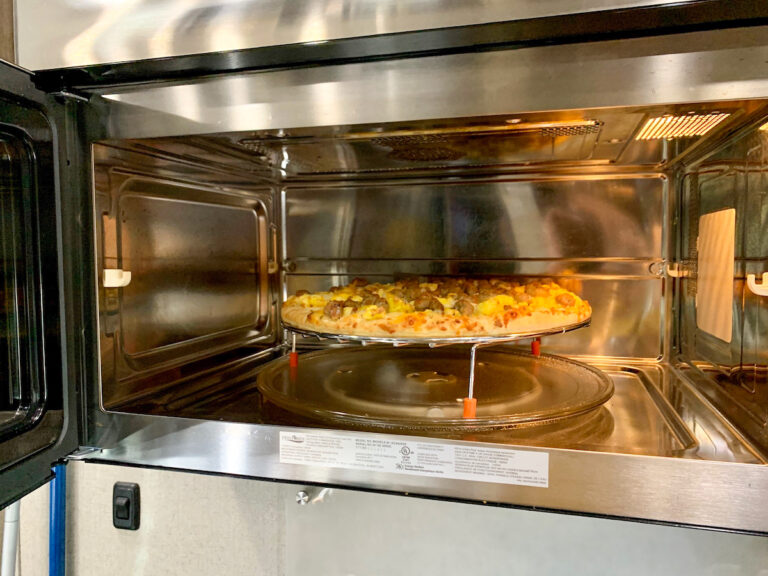 How to use a convection oven

Cooking in an RV microwave convection oven is actually very simple! I highly recommend taking a look through the instruction manual that came with your unit to get started. This might seem really obvious, but it was a great starting place when I was learning how to use the convection oven in our RV!

These instructions may vary depending on your unit, but using your RV convection oven should be a similar process.

Again, check out your instruction manual! The High Pointe Convection Microwave that came in our RV followed the steps above to use the convection oven, however, the control panels on our new KitchenAid unit are quite different.

Use the racks that come with the unit

It’s important to always use the racks that came with the unit. These are needed to lift your food up off the bottom of the oven, allowing the air and heat to circulate around it correctly. If you leave your dish on the microwave turntable it will likely not heat correctly if you’re using the convection function. 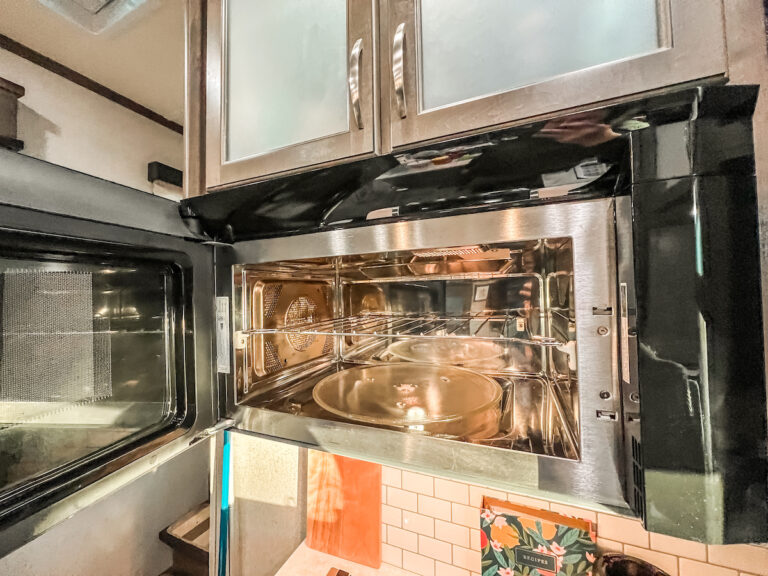 Use bakeware with lower sides

Using pans and bakeware with lower sides allows the air to circulate more effectively. As a result, your food will cook more quickly and evenly. We love these pans and often use them for roasting vegetables and easy sheet pan meals.

Because convection ovens are much more efficient, food tends to cook faster in an RV convection oven. The more you use it, the easier it’ll be for you to determine how much you need to adjust cooking times and temperatures.

A good rule of thumb is to reduce the cooking temperature by 25 degrees. I typically set my timer for the same length of time as the recipe calls for, but check it 5-10 minutes before it’s supposed to be done.

The key is to check on your food. You can always cook it for longer but once it’s burned, it’s burned haha! With a little practice, you’ll be a convection oven pro in no time.

When using the convection setting, you can treat it like a regular oven. There’s a common misconception that you have to use special bakeware and many people get confused about whether there are any particular rules to follow when cooking in a convection oven.

This means you can use cookie sheets, oven-safe glass, aluminum, and even silicone baking pans and molds like these! I’m a huge fan of Pyrex glass containers. They’re oven and microwave safe + they’re great for storing food too!

While the RV microwave convection ovens are typically thought of as a two-in-one appliance, there is a third setting on many units that combines both microwaving and convection cooking simultaneously.

You may have a button on your microwave pad that says COMBI. This function is the combination or fast bake feature. The microwave energy cooks foods faster than convection alone, while convection browns and crisps food in a way that microwaving alone wouldn’t be able to do.

This function is perfect for casseroles, meats, and other foods that generally take a long time to cook. Keep in mind since this setting does use the microwave function, metal bakeware should not be used! Use glass or microwave-safe baking dishes only.

Convection ovens are smaller than standard ovens. They take up less space overall since they’re the size of a regular microwave. We use our convection oven over the propane-powered oven in our fifth wheel so, we use our propane oven for extra food storage (pictured below) for items like chips, bread, and tortillas.

Convection ovens also are more efficient than standard ovens because of how the heat circulates. This will help you get dinner on the table quickly with no fuss. 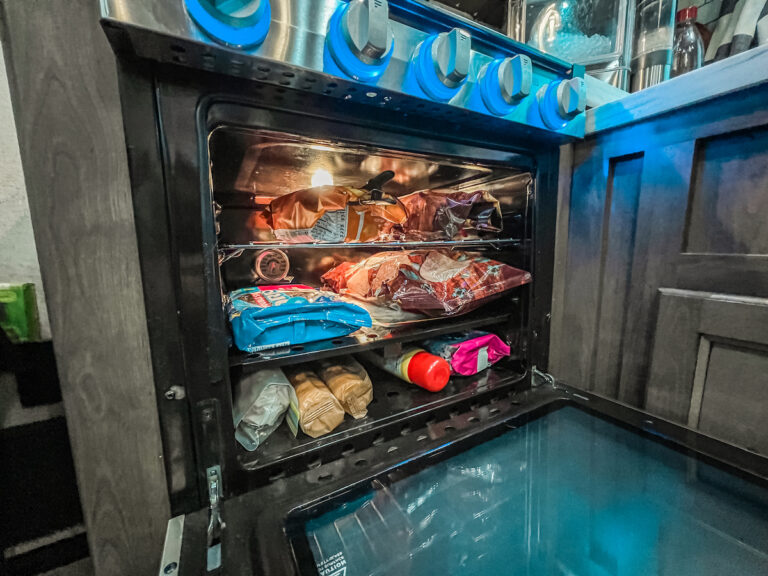 I’m a sucker for multiple appliances in one (Looking at you Ninja Foodi)! If you’re going to have a microwave in your RV why not get one that also bakes, broils, and roasts?

If you’re buying a new RV this might not matter, but if you’re renovating an RV and trying to stick to a budget, the cost of appliances is a big deal! A quick search shows RV oven ranges at a $650 – $900 price point while RV microwave ovens cost around $300 – $500. Remember, you’re getting two appliances in one with the convection microwave!

Many RV convection ovens come with an awesome safety feature, the auto shut-off function. This automatically turns off the heating element when the temperature gets too high. Additionally, some automatically turn off once the timer goes off. This is great (if you’re anything like me) and sometimes forget to turn off the oven when you’re done cooking. 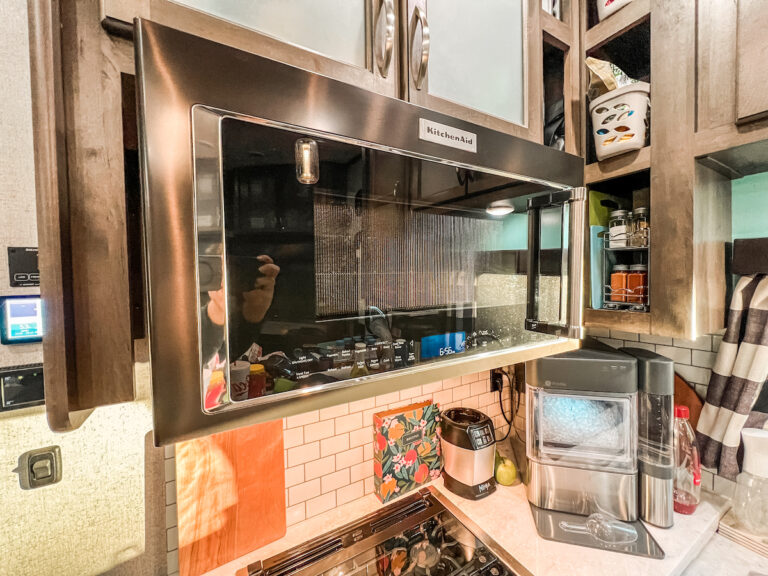 More expensive than a regular microwave

Not ideal for boondocking/dry camping

A propane-powered oven (pictured below) may be the better option if you’ll frequently be off-grid. 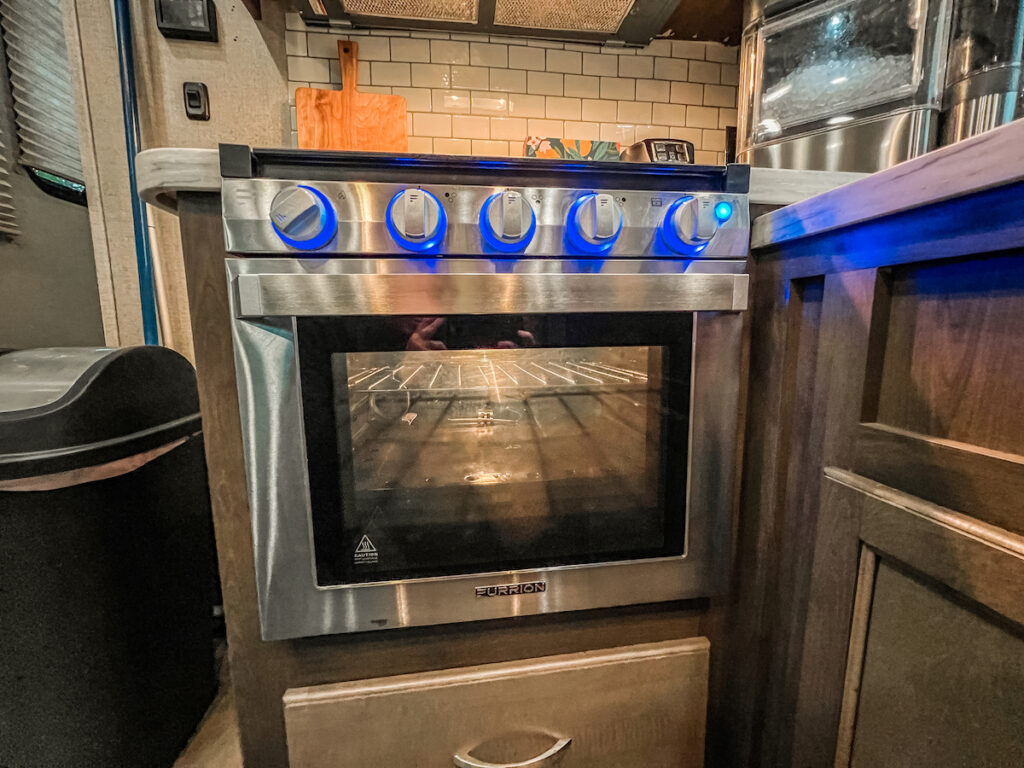 Time to get cooking with your RV microwave convection oven!

When you’re traveling or living in your RV camper it’s important to be able to cook your favorite meals from anywhere! Cooking in your home on wheels doesn’t have to be hard. Using an RV microwave and convection oven gives you the best of both worlds and gets dinner on the table quickly without fuss.

Along with our Ninja, our convection oven gets the most use out of any appliances in our kitchen. So what do you think, will you give your RV microwave convection oven a try? I hope so!

Did you find this post helpful? Make sure to pin it for later! 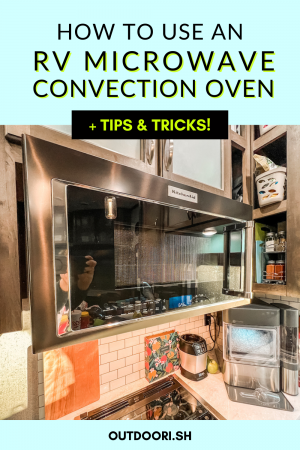 Love trying new camping meals? Check out this post all about making delicious flatbread pizza’s on the Blackstone Griddle! 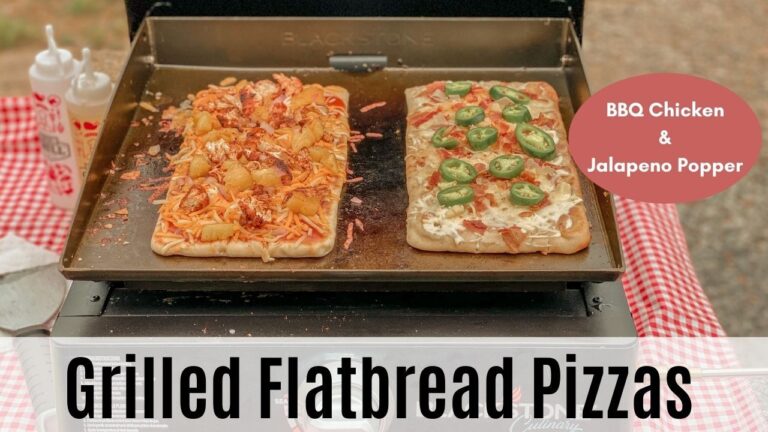